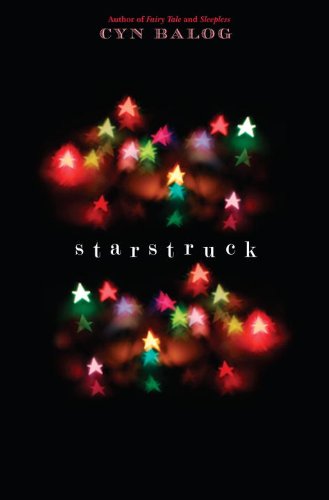 Thanks so much for stopping by Literary Cravings, can you tell us a bit about yourself and your road to publishing?

Hi! Thanks for having me. I’ve been writing since I was 5 years old and always imagined myself as a novelist, but I didn’t really think it was possible– I thought it was like saying, “I want to be a princess!” So I put it off until much, much later. I only got serious about writing 5 years ago. And once I did, everything worked out. Sure, I had my share of heartbreak and rejection, but that’s the norm in this business.
How did you come up with the idea for Starstruck and what was your writing process like?

I wrote the first half of Starstruck before I wrote Fairy Tale. At the time, it was a realistic novel about a girl suffering from serious body image problems, and her perfect boyfriend comes back into her life after three years. But after I sold Fairy Tale, my editor wanted to keep me writing paranormals. I really liked Starstruck because I’d had a lot of body image problems as a teen and I really loved the main character, so rather than toss the thing out, I wondered if I could add in a paranormal element. I was sitting, watching the news, and those days everything was about the H1N1 virus. The reporter said that the word Influenza came from the ancient belief that the stars effected the way we felt and acted. And that became the basis of the paranormal element.  So I wrote the second half really quickly, tweaked the first half, and it was done!
In the beginning, what or who spoke to your first? The story or the characters?
It’s different each time. With Starstruck, it was definitely Dough, the main character. She is essentially me. She’s not a really fun person to be around, and I don’t think I was either. I obsessed constantly about my looks. I think a lot of teen girls can identify with that.
Did you do any unique research for this particular book?
Very little. Wikipedia is as far as I went. I really try to write the book I would want to read, and I know that when I was a teen, I had so much stress from school that the last thing I wanted to do in my leisure time was be reminded of my homework. So my books are heavier on the entertainment, and not very educational!
Was there any scene or part in Starstruck that was difficult to write? And if so how did you get through writing it?
As easy as it was to understand how Dough was feeling, it was hard to see her constantly putting herself down. When you’re not in her shoes, it’s very easy to want to shake her and tell her to get some backbone. Now, I look back at myself and say, “Why was I so shy and awkward? I was young and cute!”  So while I kept wanting Dough to be braver, that wasn’t her. And I got through the scenes where she was constantly being stepped on because I knew I could make the ending anything I wanted to be. That’s the lovely thing about being an author.
Who was the easiest & hardest character for you to create?
Evie, the beautiful sister, was probably the easiest. She’s just very naive and the epitome of everything Dough wishes she could be. To Dough, she has no problems, but of course, that’s not true. I always have a hard time creating the love interest. There is so much said about the love interest in YA.  You want to make someone that makes readers swoon, but that’s really hard because if you make him a bad boy, half of the audience will think he’s hot and the other half will think he’s a jerk. If you make him a boyscout, half will think he’s adorable and half will think he’s a goody-goody. There’s a fine line.
What mythical creature or being would you want to write about that you haven’t so far?
I love zombies. I can’t write about them because others have cornered the market. But in another life, or if I die and come back to life, I will write about zombies.
Since your next novel coming out will be Living Backwards (2012), can you tell us anything about it?
The first thing I can tell you is that it probably won’t be called Living Backwards, since the first thing my editor said when she bought it was that she wanted to change the title, which is based on a passage from Alice in Wonderland. It’s about a guy who has this mysterious ability to remember things before they happen, and that includes all the possible outcomes of even his smallest decisions. I just finished writing it and I’m really happy with the way it turned out!