Since your story is essentially a ghost story, do you believe in the supernatural and what’s your favorite myth or ghost story?
An eerie experience with a professed psychic a few years ago, as well as an incident that happened to my son when he was in college, have transformed me from a cynic  into an open-minded skeptic when it comes to believing in ghosts. The psychic told me that someone in my family who had passed on was encouraging me to use some family stories for research on a project I was planning. I had been searching my house for the book containing those stories during the week prior to her visit. Nobody knew that! And in the incident involving my son, he told me one morning that he saw a deceased family member walking out of his closet. My husband and I had not told him, or anyone else, that we had temporarily stored the person’s ashes on a shelf in that closet. I haven’t read too many myths, so I’ll go with an obvious one and say The Iliad by Homer. It has everything – love, war, forgiveness, murder; and it also inspired a movie in which Brad Pitt runs around without a shirt!  Who could ask for more?

Out of all the supernatural tales why ghosts? And what makes your ghost and supernatural world different?
I have always been drawn to ghost stories. I love classics such as Rebecca by Daphne du Maurier and The Ghost and Mrs. Muir by R.A. Dick. And I’ve enjoyed many more current ghost stories such as The Thirteenth Tale by Diane Setterfield, Jade Green by Phyllis Reynolds Naylor, and A Certain Slant of Light by Laura Whitcomb, just to name a few. I wanted to write a ghost story because I don’t see many new ones being published – at least not as many as I’d like to see! And ghosts are so much more eerie and intriguing, in my opinion, than some of the other supernatural “beings” that populate current fiction. Ask most people if they’ve ever had an encounter with a werewolf or a vampire, and you’re most likely going to get a ‘no’ response. But ask if they’ve had an encounter with a ghost, and even most skeptics have a personal story to tell that makes them wonder if maybe – just maybe – spirits might exist.
As for what makes my book different, I think Through Her Eyes is a unique ghost story in that the ghost – Henry – doesn’t simply come into Tansy’s world, she enters his, as well.

I’ve noticed there is interest in the old creepy house Tansy and her mom is living in as well as the artifacts Tansy finds. Do the house as well as those artifact play as big a role in the story as the characters? If so how challenging was it to create those interest?

The poetry journal, pocket watch, and crystal do play an integral part in the story. Tansy connects with Henry, Daniel and Isabel – all characters who were her age in 1939 – through these artifacts. As for the house, it actually becomes a character, in a sense. While writing the book, I found a wonderful passage in an article in an old magazine called Our Young Folks that was published for children in the 1800’s. It illustrated so perfectly the way in which houses can take on human characteristics that I included it at the beginning of the book. It reads:
There is something human in the changes that come over
houses. Many of them keep up their respectability for a
long period, and ripen gradually into a cheery, dignified
old age; even if they become dilapidated and threadbare,
you see at once that they are gentlemen, in spite of their
shabby coats. Other buildings appear to suffer disappoint-
ments in life, and grow saturnine, and, if they happen to
be the scene of some tragedy, they seem never to forget
it. Something about them tells you,
“As plain as a whisper in the ear,
The place is haunted.”
(From Our Young Folks, July 1866, “Among the Studios, no. 3,” by T.B. Aldrich)
You asked about the difficulty of creating artifacts that were as crucial to the plot as the characters. The poetry journal was probably the most challenging, because I don’t consider myself to be a great poet – not even a fair one, actually! However, the character writing the poems in the story isn’t a professional poet, either, so it all worked out! I had so much fun with that aspect of the book. Writing the poems provided a nice change of pace for me.

Who was the easiest & most challenging character for you to create?

It’s always tricky to build an imaginary person out of words and make them seem like a living breathing human being. However, if I have to choose one character in this book as being the easiest to create, it would have to be Tansy’s mom, Millicent. She is a mother and a writer, as I am. So at this point in my life, I can really relate to Millie. If I have to choose one character as having been the most difficult to create, it would be Henry. He is such a complex guy with so much brewing beneath the surface. Henry is very troubled. He is both a victim and a victimizer. Henry has a dangerous streak and many bad traits, but I like to think that he also has a good heart.

Since your story is all about magic and seeing history through the lens of a camera, if you could go back in time and visit one person, who would it be and why?

I can think of so many different historical figures I would like to meet! Writing Bethyl Ann’s character required that I do a good bit of Shakespeare research. As a writer and storyteller, Shakespeare reigns supreme. He was able to accomplish with a single sentence what most other writers – myself included – struggle to achieve in a full novel. Shakespeare would definitely be worth the trip back in time! I’d like to pick his brain for an hour or two.

Thanks for stopping by Jennifer!!!
Readers, be sure to check out Through Her Eyes, coming out in April, 5!! 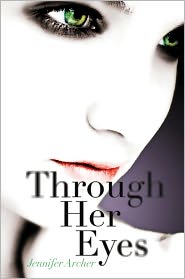