Thanks so much for stopping by Literary Cravings, If you could sum up Eternal Rider in four words, what would they be?
Sexy, apocalyptic good times!

Since coming off the your very successful Demonica Series, why did you decide to write about the four horsemen of the Apocalypse in The Lords of Deliverance?

Well, in part it’s because I needed some different scenery. I didn’t want my writing to get stale, and I definitely wanted the Demonica series to go out on a high note. Granted, the new series is very close to the Demonica series and set in the same world (and we see a lot of Demonica characters in it,) but it’s giving me a fresh storyline to play with.

The characters, definitely. I’ve had them in my head for years. Sin Undone just gave me the vehicle to bring them to life.
Did you do any unique research for Eternal Rider?
Yes! I’ve been reading a lot of religious texts and doing a lot of religious research. I’ve also been watching apocalyptic and Biblical prophecy shows on the History/Discovery/National Geographic channels. It’s been fascinating!

Was there any scene or part in the Eternal Rider that was difficult to write? And if so how did you get through writing it?

There was no one scene that was difficult…honestly, the whole book was hard. I was really trying to shift gears while dealing with a family emergency, so the writing didn’t come easy. To get through it, I just had to lock myself in a room by myself at times do nothing but write. I spent a lot of time by myself for this book!
I feel that names hold meaning and importance to characters and you’ve picked some pretty great names. How do you come up with or decided on the names for your characters? Do they hold meaning?
Names have always been important to me, and I like there to be a connection of some sort with them. For example, from the Demonica series, the names for Shade, Wraith, and Eidolon are all types of ghosts in different languages.  In my new series, the names are all connected with ancient mythology. Limos, for example, is the Greek/Roman spirit of hunger and starvation, so she is the Horseman known as Famine.

Reseph, which might be odd because he starts off the series as evil. He’s the Horseman known as Pestilence, and his Seal breaks in Sin Undone…which turns him from a pretty cool guy into Pestilence, who is an absolute terror. But he’s SO easy to write. I really can’t wait to write his book, which will be the fourth and last one.

After tackling the four horsemen of the apocalypse what supernatural creature/s would you be interested in writing about?

I’d like to do vampires or werewolves, I think. I really enjoy exploring the dark side of their natures, and with werewolves, I’d love to play around with them in their animal forms.

Thanks so much for having me!!!!

You are welcome Larissa!!!

Check out Eternal Rider out March 29!! 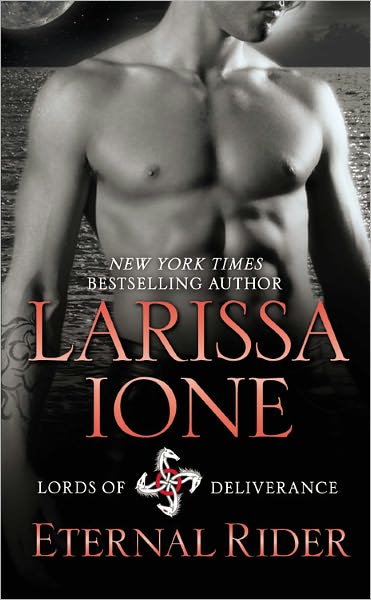