Thanks so much for stopping by Literary Cravings, If you could sum up Born at Midnight in four words, what would they be?

C.C.:  Thanks for having me.  Now, about your question . . . Oh, that’s hard.  Like I always tell people, I’m from the South and we are naturally long-winded people.  Describing Born at Midnight in only four words is hard but I’ll give it a try.  How about . . . Paranormal Summer Camp Adventure?  Or maybe, Self-Discovery with a Twist?  Does a hyphenated work count as two?  Hey…math was never my strong point.  LOL.

What most influenced you to write this book?

C.C.:  Well, I was asked to write a book about a paranormal camp.  And for me, a book is about the characters.  I spent a lot of time taking a walk down memory lane and remembering what it was like to be a sixteen-year-old girl on the brink of discovering who she was and who she wanted to be.  In many ways, I plagiarized from my own life to create Kylie.  My parents got a divorce when I was sixteen, and I was dumped by a boy who wanted things I wasn’t ready to give him, just like Kylie. I even had some good friends who decided to take a walk on the wild side, and it hurt to see them make mistakes that I knew they would live to regret.

Kylie’s not the only character who has a part of me in her, either.  Miranda, her roommate at Shadow Falls, is a dyslexic witch who often gets her spells wrong.  I’m dyslexic, too, so I drew on that when I was crafting her character.  I guess you could say that I took all of my memories and experiences, fictionalized them a little—sometimes a lot—and the result was Born at Midnight.

C.C.:  Oh, this is a good question.  As I said, my editor actually gave me the idea of a paranormal summer camp, but I’m really a character-driven writer.  The story doesn’t come alive until the characters start talking to me.  So, I’d have to say the story idea was dropped in my lap, but it sat there and had the personality of a rock.  It didn’t talk or even move until I tossed in a few character details and then I couldn’t stop it from jabbering and jumping around.  Once I got the characters figured out, the story practically wrote itself.

Did you do any unique research for Born at Midnight?

C.C.:  Absolutely!  First, I went on a reading frenzy of YAs.  I had read a few YAs, but I hadn’t studied them.   I must have bought dozens of books, and I devoured every one.  Not all of the ones I read were paranormal but many of them were.  I wanted to understand the genre and reading books is the best way I know how to do that.

Next, I did some research on the various mythologies I would be using in the series.  I’m talking about vampires, werewolves, shapeshifters, witches and faes.  And it was fascinating reading, too.  Doing that research helped me understand their mythology, which I needed to do before starting my book.  Of course, once I started plotting the Shadow Falls series, I tweaked the mythology a little (okay, a lot) so my supernatural creatures would fit with my vision of Shadow Falls.

Finally, I drew upon my own experiences.  No, I don’t mean that I’m a supernatural or anything like that, but I have had experiences where I could swear I’d been visited by ghosts.  I guess that’s why I’m really a fan of ghost stories.   And it’s the reason I couldn’t pass up working in a ghosts into this series.

Was there any scene or part in the Born at Midnight that was difficult to write? And if so how did you get through writing it?

C.C.:  Another great question.  I guess you could say I’m a very emotional writer.  When I write a funny scene, you’ll hear me laughing all by myself in my office.  When it’s a sad scene, I’m generally sitting at my desk, tears running down my cheeks, mascara smearing—I’m a total mess.  It’s a good thing I always keep a box of tissues beside me.  Anyway, there were several scenes in Born at Midnight that had me sobbing.  First, there was the scene where Kylie’s daddy leaves her standing outside after she begged him to take her with him.  I remember when my own parents broke up when I was around Kylie’s age. It hurt like nothing else ever had.  Then there was the scene where Kylie offered Della her blood.  That scene was so hard for me to write—not that it was a difficult scene but the emotion of it really got to me.  I think of that scene as a turning point for Kylie’s growth as a person, as well as her relationship with Della.  Finally, there was the scene where Kylie’s dad didn’t show up for Parents Day.  Ouch.  That hurt Kylie and writing about that pain—honestly, what could be worse than getting stood up by your own father?—had me reaching for the tissues.

I feel that names hold meaning and importance to characters. How do you come up with or decided on the names for your characters? Do they hold meaning?

C.C.:  Okay…you’ve just hit on my weak point.  I’m so not good at naming characters.  I tried to think of names that had a paranormal feel to them.  Names that felt mysterious somehow.  Of course, that really didn’t work out too well.   LOL. My characters generally tell me their names when I start fleshing them out.  Now, I know that sounds weird. I just said I talk with my characters, but it’s true.  I have these conversations with imaginary people—it’s one of those weird writer things.  Anyway, what usually happens is I get this vision of a character and try and come up with a cool name, only to have the character start talking and say, “I don’t like Esmeralda, so why don’t you call me Miranda.”  LOL.

After tackling Born at Midnight what are you working on next?

C.C.:  Oh, thanks for asking.  Right now, I’m working on Taken at Dusk, which is Book 3 of the Shadow Falls series.  Kylie is learning more about herself, about how she fits in the supernatural world.  Taken at Dusk is going to be a very emotional book—yes, there still be lot of my humor, but there will also be a death.  Although I can’t really talk about that in any detail, mostly because I haven’t written it yet but I know it’s coming.  I’m going to have to stock up on tissues.

C.C.  Thanks again for having me here!  I’ve had a great time.  I’d also like to add two things if I could: 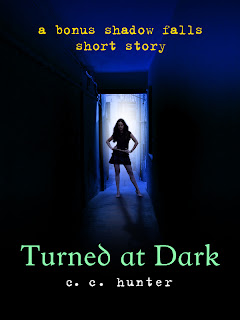 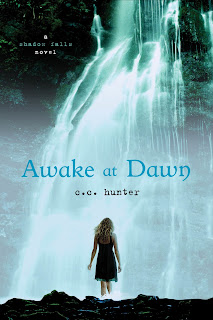 And second, to celebrate the release of Born at Midnight, I’m running a “Tweet my Book and Win a Kindle Contest” from March 22th through March 29th.  The grand prize will be the Kindle but I’m also giving away copies of Born at Midnight, some Shadow Falls swag and ARCs of Awake at Dawn, which is scheduled to release in October. All the details will be at my blog beginning March 22nd – Blog.  So, please drop by and help me tweet my book and you could win a Kindle!

C.C. Hunter was gracious enough to host a giveaway with me! So one lucky winner will win a copy of Born at Midnight and a pack of cool swag!!!! 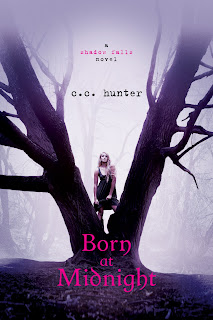 *Rules*
Open until April 4 12:00pm (eastern standard time)
Open to U.S & International !!!
Must be a follower
Must be 13 years old or older
Winner will be selected with the aid of Random.org
Fill Out Form To Enter
Giveaway Finished