Books: (Blood Coven Vampire Series)
Boys That Bite
Stake That
Girls That Growl
Bad Blood
Night School
Blood Ties
The Art of Character Building
Think back to you favorite book. Do you remember the plot? Or was the characters who stuck most strongly in your head, long after you reached the end? As a reader, my favorite books are the ones with characters who leap off the page–who feel like living, breathing people who are so real, I would ask them to be friends if they were to walk up to my front door.
As an author, I try to challenge myself to create such characters. With my book Gamer Girl, I got hundreds of emails from readers who told me the main character, Maddy, was “just like them.” Probably the biggest compliment I could have received. She was flawed, but strong. She was pushed down, but got up again. And readers told me her story inspired them, in their own lives, to kick back at the bullies–the Haters–and stand up for themselves and what they enjoyed, be in manga, videogames, or something else entirely.
With the fifth book’s upcoming release, the Blood Coven series has quite a cast of characters as well. Some are silly–one-dimensional caricatures created for laugh–such as Bertha the Vampire Slayer and Lucifent, the former Blood Coven master who looks like the kid from the Sixth Sense. But for the main characters–Sunny, Rayne, their mother, Magnus, Jareth–I try to bring them alive and go beyond the stereotypes.
For example, the twins. On the surface, Sunny appears to be your normal, everyday high school student who loves field hockey and drama and cute boys. Her twin, on the other hand, is drawn to the dark side–with a passion for goth music, black clothes, and, of course vampires.
But as you read the books, you soon realize Sunny’s not just a jock and Rayne’s much more than just your stereotypical goth girl. For example, both have strengths and weaknesses and a past that constantly challenges their attempts to trust and believe what people say. Their father took off on the family four years ago–and hardly ever remembers to send a birthday card.
You see the two girls react to this continual disappointment very differently. (Sunny’s eternally optimistic and maybe a little in denial while Rayne keeps her feelings buried inside until it explodes.) But no matter how they deal with it, both suffer from the same feeling of abandonment which ends up affecting almost every aspect of their lives, including their relationships with their vampire boyfriends. After all, the first man in their lives didn’t exactly prove trustworthy.
In addition, one thing I really tried to do–and I love when reviewers and readers point this out–is to show a deep bond between the twins. Even though they are very different and banter and bicker quite a bit, at the end of the day, they are there for one another–whether it be to literally save the day or just lend some emotional support to their twin. They love each other and are best friends and nothing–vampire or otherwise–is ever going to come between them.
The story is about vampires. But if you took away the vampires and other supernatural creatures, you’d be left with a story about a struggling family. How they work to stay together, even through constant disappointment. And I truly believe that’s what’s allowed the series to continue. Because let’s face it, people have a lot of choices when it comes to vampire novels. But it’s the characters–Sunny and Rayne–that keep readers coming back for more. (And also make the stories much more interesting to write!)

*Be sure to check out Mari newest book Night School coming out January 4, 2010!* 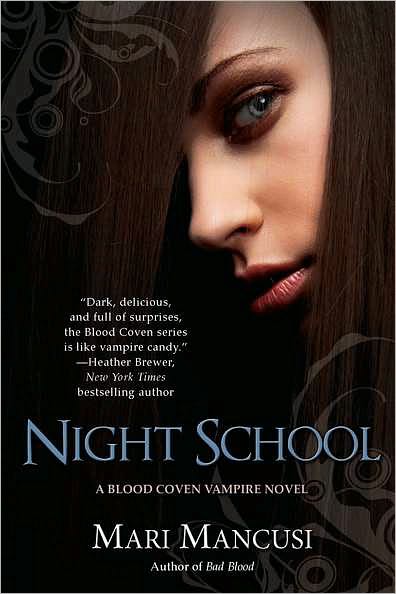