Thanks so much for stopping by Literary Cravings, can you tell us a bit about yourself and your road to publishing?
Thanks for having me. My road began back in 1978 when my first novel, THE KADIN, was published by Avon Books.
I’m one of the original 8 women known as The Avon Ladies whose novels revived Romance in publishing. Back in the day there were the 8 of us, as well as Robbie Gellis, Jennifer Blake, and a guy from Texas named Jennifer Wilde who was actually Tom E. Huff, a delightful and talented Southern gentleman. After my second book was published with Avon I moved over with my then editor to Ballantine. I was with them for 19 novels. I have also published with Kensington, HQN, and NAL who are the exclusive publishers of my historicals now. THE BORDER VIXEN is my 50th novel.

How did you come up with the idea for The Border Vixen and what was your writing process like?
I don’t really have a process. Last spring Jo Beverly wrote an article for RWR about writers like herself, me and a group of others. It was called “Into The Mist”. We don’t ruminate, cogitate, write detailed outlines. We sit down and write the book. I’ve always done it that way. With THE BORDER VIXEN the main character, Mad Maggie Kerr, a girl who refused to marry unless her husband could outrun, outride and out fight her, came first, and the rest developed around her. Sometimes the first idea is a place, or a situation. I never know. It varies. I do, however, write 6 days a week much of the year from morning, with a break for a midday dinner, and then until about 7 p.m. Sometimes I’ll work later.

Since The Border Vixen is the newest in the Border Chronicles series did you do any research for this particular book?

My books are all carefully researched. “The Border Chronicles”series is actually held together by only 2 things. They all take place in the borders of Scotland, and the names of the families are those who actually lived in the borders. Each book has been set in a different time and a different reign. I generally wrap the story about the period and the events taking place.

What are your must haves during writing?

I work in my own office. I have a large library to fact check. I like quiet. And I don’t connect my PC to the internet. I have a separate computer for everything else. Too many writers spend too much time on the internet. As one writer whose name I don’t know said, “it’s a time vampire” and it is. When I work, I work. But chocolate helps.

Do you have any niches you do while writing? Like listening to music,est? If so what do you do or listen to?
No. I have a tendency to sing along which is very distracting. I also whistle an excellent version of Mozart’sEine Kline Nacht Musik. Personally, however, I like romantic music, classical, Frank and Tony, old Broadwayshow and movie music, the Monkees and the Beatles. But I really do prefer a peaceful surrounding. However Ican work anywhere if I have to, and sometimes over the years I have.

Who was the easiest & challenging character for you to create?
They are all such individual characters, each unique in her/his own way. The most memorable for readers seem to be Janet Leslie (THE KADIN), Skye O’Malley (SKYE O’MALLEY AND ALL THE SWEET TOMORROWS), Lara (THE WORLD OF HETAR). Some love Rosamund (THE FRIARSGATE INHERITANCE), and Wynne of Gwernach (A MOMENT IN TIME). Francis Stewart-Hepburn from LOVE WILD AND FAIR, Niall Burke, Geoffrey Southwood, and Adam de Marisco of The O’Malley Saga series, and Prince Kaliq from The World of Hetar series seem favorites among the men. I did want to do a book on BLAZE WYNDHAM’S younger sister, Delight Morgan, who was swept off to Ireland by her betrothed, but Delight was always a difficult girl, and she absolutely would never share her story with me.

IIf you had to pick a favorite time and place what and where would it be and why?

I love all the times and places about which I write. If I didn’t I wouldn’t be bothered with them. I keep my stories usuallyin England, Wales, Ireland or Scotland in the times between 1066 and Charles the second although I have done 3 books inthe late 1700s and early 1800s.(UNCONQUERED, DECEIVED, THE DUTCHESS) I love Ottoman Turkey. Several of my earlier books were set there. I loved the ancient world of my novel BELOVED (Zenobia of Palmyra’s story) and the 5th century of ancient Britain and Byzantium.(TO LOVE AGAIN). It’s the history that draws me.
Since writing The Border Vixen what are you working on next?
I’m currently begining my last book in The Border Chronicles, #6. It will be set in the time of Mary, Queen of Scots.

The heroine is Annabella Baird and my hero is Angus Ferguson. Both good border names. After that I have a new series in mind that will be set mainly in England.

*Be sure to get The Border Vixen out Now!!!* 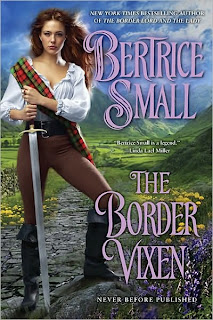