Thanks so much for stopping by Literary Cravings, can you tell us a bit about yourself and your road to publishing?

Thanks for inviting me!  I spent the first part of my life as a trial lawyer, but always wanted to write.  After the tragedy of September 11th, my husband’s Navy squadron was one of the first sent to Afghanistan and I wrote a book about how very hard it is to be a military family during war time.  That was my first published book and gave me the courage to give up my day job and try my hand at fiction.


How did you come up with the idea for Atlantis Betrayed and what was your writing process like?
Atlantean warrior Christophe has always been a favorite of mine (although many readers were quite vocal in how much they disliked him – he was quite a smartaleck!), because I knew something horrible had happened to him to make him so bitter.  I felt protective of him, and when I realized all that bitterness and rage was because of a horrible betrayal, the book built itself around that.  I really loved a recent review that said I’d taken a character the reviewer had loved to hate and made him one of her favorite heroes.  Plus I’d always wanted to write a heist book, and writing an infamous cat burglar, the Scarlet Ninja, was a blast.
Since Atlantis Betrayed is your sixth book in your Warriors of Poseidon series was it easier or harder to write?
They all have their own challenges.  I write each book as a stand-alone novel as well as part of a series so there’s always that tricky balance of putting in enough history for the new reader yet not boring my loyal series readers with a ton of history.

Did you do any research for this particular book and was it different from your others?

I always do a ton of research—I believe when you write paranormal, the trick to getting the reader to suspend disbelief on the fantasy elements is being dead-on in your reality.  I now have a full shelf of books on London.  The most fun, though, was that since I couldn’t get away to London, my dear friend (and amazing writer!) Michelle Cunnah toured the Tower of London where the crown jewels are kept for me. She even asked a guard how she could escape if she robbed the place!!  I love that woman.
What is your must haves during writing?
A dog or two at my feet.  This is more their requirement than mine, but I go along.

Do you have any niches you do while writing? Like listening to music,est? If so what do you do or listen to?

It depends.  My friend Barbara Caridad Ferrer (another amazing writer!) made me Atlantis playlists with wonderful music, and I enjoy listening to those.  Sometimes I’ll get in a groove and just listen to one CD over and over and over while I write the book; just turning it on creates a sort of Pavlovian nudge that puts me immediately in the book.  Atlantis Unleashed was the soundtrack from Phantom of the Opera, in fact.  And speaking of music, please check out the incredible music video based on an original song about my books that’s at my website, alyssaday.com.

Who was the easiest & hardest character for you to create?
Wow.  I have no idea how to answer that!  Characters aren’t hard for me to create—my problem is making sure there is enough emotion in the book with all my swordfights.  LOL.  I usually spend a good bit of time after the first draft going through the scenes and saying to myself, “Yes, but how do they FEEL about the action?”

If you had to pick a favorite character from Atlantis Betrayed, which would you pick and why?

I couldn’t possibly pick.
Since writing Atlantis Betrayed what are you working on next?
I’m finishing Daniel’s story—readers have been clamoring for him!  VAMPIRES IN ATLANTIS will be out in June.
*Be sure to get Atlantis Betrayed out Now!!!* 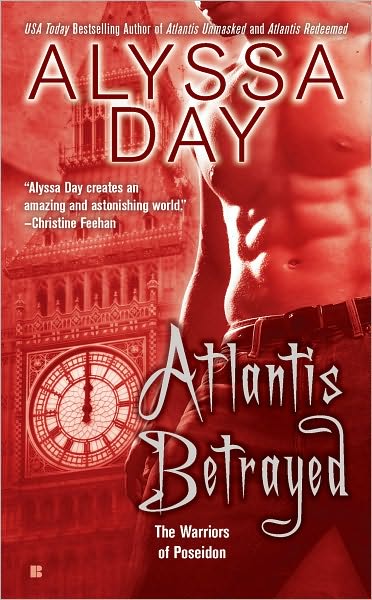