Books: The Magnificent 12: The Calling

Thanks so much for stopping by Literary Cravings, can you tell us a bit about yourself and your road to publishing?
Well, first, as always, don’t try this at home.  I dropped out of high school, got in all kinds of trouble, eventually found myself broke and living under a freeway overpass in Austin, TX, happened to see this girl through her window, met her, we moved in together and were basically losers for about 10 years when she finally said, “It’s time to put down the bong and get careers.”  The girl in question was K. A. Applegate.  And that’s how I became a writer.  Like I said: do not attempt to emulate.

How did you come up with the idea for The Magnificent 12 and what was your writing process like?
I have two Katherines in my life.  My wife, Katherine Applegate, and my editor, Katherine Tegen.   Katherine A has been telling me for years I should write something funny.  Katherine T happened to need a middle grade series.  So I said, “How about something funny?”  And then I started working on the concept.  And wow, it was really fun.  I’ve never had more sheer, stupid fun while working.
My writig process involves sitting in my back yard, wearing a stupid hat, headphones on, strong coffee close at hand, the occasional cigar, and a lot of typing.

How did you research for this particular book?
Well, it’s not exactly research, but I had to create a language.  Vargran, the language of magic spells. It has four tenses: present, past, future and “or else.!”
Since writing your Gone series, how is The Magnificent 12 different? And was it easier or harder to write?
In terms of difficulty, on a ten point scale, Gone is about an 8.5 for me.  It’s hard.  The books are long and very complex with lots of characters and plot threads.  I have to be paying very close attention when I write Gone books. Magnificent 12 is so easy to write I would do it for free.  (Well . . .)  It’s just ridiculous fun.  I laugh while I’m writing.  And not the evil laugh I have while writing Gone.

Do you have any niches you do while writing? Like listening to music,est? If so what do you do or listen to?
When I’m writing first drafts I listen to music.  Number one band is Rancid and all its offshoots.  Green Day.  Eminem.  Offspring.  Lady Gaga.  Ramones.  Nirvana.  Zeppelin.  Stones of course.  Then blues, like B.B. or Buddy Guy.  I don’t usually do ballads and I won’t listen to anything with auto-tune.

Who was the easiest & hardest character for you to create?
For MAG12 Mack was easy, so was Stefan — the King of All Bullies.   The Golem has required some thought.  And in Book #2 I had to find a way to Paddy “Nine Iron” Trout sympathetic. In GONE I think Quinn is the hardest to write and Diana the easiest.

I like Brianna’s super speed in Gone —  I’m a horribly impatient person.  Of all the characters I’m working with right now, in both series, I love Diana.  The bad girl who may just have a heart.
Since writing The Magnificent 12 what are you working on next?
I’m actually working on an ARG/book series with 42 Entertainment and The Shadow Gang.  The idea is to grow a concept simultaneously as an ARG, a straight book, an enhanced e-books, a web site, and with merchandise, as a single, simultaneous, unified concept.
*Be sure to get The Magnificent 12: The Calling out now!!!* 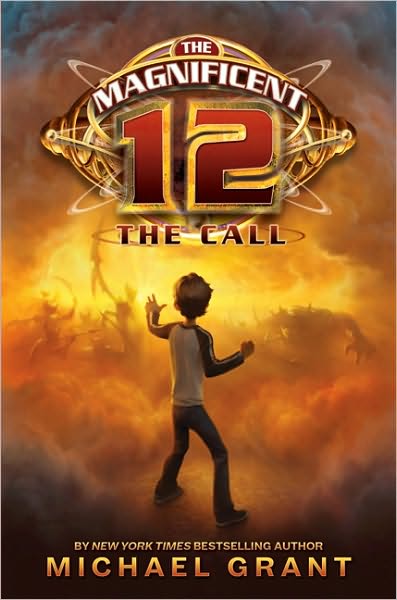