Thanks so much for stopping by Literary Cravings, can you tell us a bit about yourself and your road to publishing?
I started writing in high school, but never took any creative writing classes. I was always WAY too intimidated by creative writing types — they seemed much more intellectual and angsty than me, and I suspected they wouldn’t be impressed by my obsession with romance novels. I was also way too practical to consider trying to make a living as a writer. I ended up going to law school so I could write all day long and actually get paid for it. But scholarly essays and legal briefs didn’t capture my attention the same way gentlemen pirates and supernatural powers did. I got back into writing in 2005, after being stuck in a hotel in Anchorage for two weeks for an incredibly boring trial. Over the next couple of years I wrote two adult romance novels and then after hearing Meg Cabot speak at an RWA conference, decided to try YA.

How did you come up with the idea for Delcroix Academy and what was your writing process like?

My favorite genre when I was in high school was fantasy (David Eddings, Anne McCaffrey) and there were always very clear good guys and bad guys in those stories. I wanted to explore the idea of a world in which there were mysterious, paranormal forces, but no clear way to tell the good from the bad.
For me, it came down to a question — what if you had a superpower, but bad things happened when you used it. Would you use it anyway? Hide? How would you deal with the pressure, and the responsibility?
As for my writing process, I love to talk through ideas, but I also need space to mull over things mentally. It’s an iterative process. Mull, talk, write, mull, talk, write. You get the idea. 🙂
I have a critique partner who is an incredible sounding board and I rely on my husband a lot to listen to me as I’m working through an idea. He also  read my rough drafts. He works in an elementary school and reads a ton of YA and children’s literature, so he has a great sense for what works (and what doesn’t).
How did you research for this particular book?
This story didn’t really involve a lot of research. I basically just sat down and out it came. 😉 I live in the Pacific NW, so I didn’t need to research the location. I did drive up to the small town in Washington on which I loosely based Dancia’s hometown a couple of times. Unfortunately, I was not able to practice paranormal powers while I was working. But that would have been fun.
Do you have any niches you do while writing? Like listening to music,est? If so what do you do or listen to?
If I listen to music while I’m writing I tend to start singing along, and then can’t write. LOL. When I need something in my ears (usually to distract me when I’m in a loud coffeeshop), I have a couple of French artists I listen to — Thomas Dutronc and Benabar. Their songs have words, but they’re in French, so they don’t distract me. 🙂

Dancia was by far the easiest. I don’t really filter her very much; her voice just rings in my head and I put it down on the page. Cam was a really difficult character for me. He’s much more complex than he seems at first glance, and I had to struggle to find ways to give hints to his complexity without losing his “good boy” exterior. (BTW, you’ll learn more about the real Cam in Book 2, Delcroix Academy: The Watchers.)

I don’t have favorites (they’re all my children!) but I would LOVE to fly. My favorite dreams involve flying.

Since writing Delcroix Academy what are you working on next? 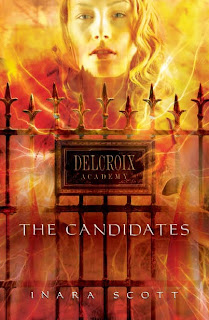