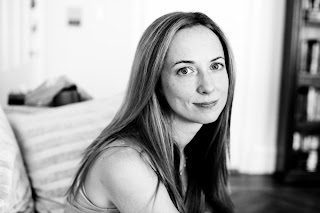 Thanks so much for stopping by Literary Cravings, can you tell us a bit about yourself and your road to publishing?
Hello, hello, happy to be here. My road was kind of strange: I was working as an editorial assistant and I got the chance to ghost-write a picture book for a celebrity singer (shh!). And I really loved doing it. I’d been writing my own things, but suddenly I had that realization: I LOVE writing. That was fifteen years and twenty books ago.

How did you come up with the idea for The Julian Game and what was your writing process like?

Julian came to me all different ways. A crazy story about girls filming themselves peeing on the lawn of a girl they didn’t like– yick. A party where I saw a woman looking ravishing and mysterious in a china-doll wig. A long-ago memory of a boy with pale, Julian-blue eyes. It grew slowly. Then I got obsessed, as the plot took shape.

Did you do any research for this particular book?

What is your must haves during writing?
Lately it’s been a Post-It that says, in purple ink: don’t go online. I have to read it, know it, live it. Online is the great procrastinator.

Do you have any niches you do while writing? Like listening to music,est? If so what do you do or listen to?

I need silence. I envy anyone who works with music. You know what I do if there’s music? I start typing the lyrics into my novel. And thinking about singers, and who that singer wrote this song for, and thinking things like why do I have such a bad voice as I croak along. It’s a mess. But silence works for me.

Julian was a tough character, because he was sort of equal parts wonderful and weak. His weakness was his need to be liked, I felt like that’s hard to infuse into a character without making everyone just say, “oh, how lame, he’s repulsive” and dismiss him. I wanted his weakness to be inside the realm of a reader’s understanding.

It’s an oldie, but Anne Shirley of Anne of Green Gables really knocked my socks off. I know that there are more nuanced characters/novels out there, but Anne came into my life when I needed her most (age 10). And there she was, creating chaos, tearful and apologetic, then creating more chaos.
I’d like the power to know I get to return to life as a ghost. I’d love to haunt people and freak them out.

Since writing The Julian Game what are you working on next?
Speaking of ghosts! I just wrote a loose retelling of The Turn of the Screw, my favorite ghost story, ever. It’s called Tighter and it comes out next spring.
*Be sure to get The Julian Game out now!!!*