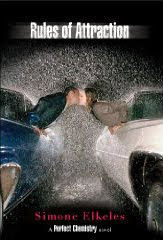 Author: Simone Elkeles
Publishing: Walker Books for Young Readers (April 13, 2010)
New sparks will fly in the sequel to Simone Elkeles’s breakout book Perfect Chemistry
When Carlos Fuentes returns to America after living in Mexico for a year, he doesn’t want any part of the life his older brother, Alex, has laid out for him at a high school in Colorado. Carlos likes living his life on the edge and wants to carve his own path—just like Alex did. Then he meets Kiara Westford. She doesn’t talk much and is completely intimidated by Carlos’ wild ways. As they get to know one another, Carlos assumes Kiara thinks she’s too good for him, and refuses to admit that she might be getting to him. But he soon realizes that being himself is exactly what Kiara needs right now.
With new characters to fall in love with and the same hot romance found in Perfect Chemistry, Simone Elkeles has crafted another sure-fire hit for teens.
*Provided by: Amazon.com*